The past few years have been volatile for the LGBTQ community. Over the past several years, there has been an escalation of politicians in Tennessee and across the country who have turned a blind eye to trans, gender non-conforming, and intersex students’ safety and well-being.

Many people have been asking me about the Tennessee Legislature’s recent actions regarding the state’s LGBT student bill. If you have a child in public school and you live in Tennessee, the chances are good that your child is going to be affected. Here is what I know.

In rural America and small towns, the church’s widespread reliance on limited opportunities and opportunities can deter local government officials from confronting preachers who cloak biblical error in sensational but persuasive propaganda. Elected officials often remain silent for the sake of re-election. This government complicity, coupled with a general lack of diversity, can threaten voters from marginalized groups, who often feel that their outward differences and hypervisibility make them vulnerable to collective scapegoating.

Evasion and a lack of commitment on the part of leadership may make the stakes even higher in Tennessee, where the General Assembly recently passed the most anti-transgender laws in the country.

Let’s take an example from my hometown of Springfield, Tennessee.

On the 18th. In May, Springfield city leaders voted unanimously to allocate $1 million for the Bransford Community Center. The center was built on the site of the historic high school, now demolished, where my grandmother graduated. Her mission is to give hope to all Robertson County residents, regardless of race, socioeconomic status or age.

Sounds inclusive and inviting, right? Nonetheless, Robert Gardner, founder and president of the Bransford Community Center, took to Facebook Live from June to September of last year to deliver rehearsed sermons and Bible lessons full of anti-LGBTQ rhetoric. See for yourself. During that four-month period, Gardner – a retired engineer who now heads the international organization City of Faith – recycled conspiracies, misinformation and anti-LGBTQ stereotypes.

According to the Southern Poverty Law Center,

The central theme of anti-LGBTQ organizing and ideology is opposition to LGBTQ rights, often expressed in demonizing rhetoric and based on harmful pseudo-science that portrays LGBTQ people as a threat to children, society, and often public health.

Interestingly, Bransford’s board of directors includes Republican Senator Kerry Roberts and Republican Delegate Sabi Kumar. Both Kumar and Roberts recently voted in favor of HB 0580, a bill that bans education about systemic racism in public schools, and in April Roberts publicly opposed a curriculum that includes LGBTQ people. Roberts also said abolishing higher education, a liberal hotbed, would save America.

Twenty Tennessean articles since about 2014 have covered the story of the founding of the Bransford Community Center. Local officials have already committed millions of dollars to the investment campaign. In recent years, the Tennessee Department of Education has funded the center’s main initiative, Pride of Bransford, with a LEAPS grant of $60,000.

My attempts to educate elected officials in my hometown about the impact of exclusionary dogmatism on LGBTQ youth met with silence. When I recommended to board chair Bransford Gardner that he read my publications in Psychology Today on mental abuse by LGBTQ people, he also seemed to take issue with his legalism. Given the rigid thinking that characterizes fundamentalism, which leads to absolutism, literalism, oversimplification, complacency, and superstition toward modernity, Gardner’s answer disappointed me more than it shocked me.

But what ultimately disappointed me was the lack of response from officials who took an oath to govern to the best of their ability. In two cases, I illustrated a snapshot of the pervasive and ongoing trauma experienced by LGBTQ students in Tennessee. Let me draw you a picture.

In the Springfield, Middle Tennessee area, children who are openly LGBTQ or stereotyped as LGBTQ+ make up 40% of homeless minors, and 78% of them face other forms of abuse in the child welfare system. Given that 80% of Tennessee is Christian and that Pulaski, Tennessee is the birthplace of the cross-burning KKK, the suggestion that religious extremism plays a role is not far-fetched.

So it’s no surprise that the Trevor Project – the only 24-hour suicide and crisis prevention hotline for LGBTQ youth in the country – recently reported to NBC that Tennessee youth contacted the Trevor Lifeline 2,400 times during the pandemic.

And in 2019, only 9 percent of LGBTQ students in Tennessee described their school’s curriculum as inclusive, according to a report from GLSEN (Gay, Lesbian & Straight Education Network) TN. However, 44% reported hearing staff make derogatory comments about gender identity, and 25% experienced heterosexist prejudice toward LGBTQ romantic orientation.

I explained to Springfield leaders that institutional involvement is essential to protect and educate children, as childhood and adolescence are critical developmental periods with increased vulnerability to trauma. I explained how for some children places like Bransford are their only refuge and buffer against violence within their families and on religious grounds, or against the community and school. I have warned that pastors fail to compartmentalize fundamentalist bigotry within the strict parameters of religious leadership. And I have reiterated that advocates and educators who refuse to create supportive spaces where respect and safety prevail are failing in their responsibility to society as a whole.

Mayor Ann Schneider did not respond, nor did council members Bobby Trotter and Emily K. Green. And Councilwoman Lisa DiVirgilio Arnold has blocked me on her public Facebook page.

While these leaders did not confirm my concerns, they did paint a picture, albeit an unintended one, of how complicity and denial perpetuate institutional prejudice and systemic injustice. Their inaction and passivity can be as damaging to any minority as overt prejudice and discrimination. We need leaders who will take a stand and support LGBTQ youth, especially queer youth of color, a population that is hostile by structural measures and ignored because it is not hostile.

These officials can generally be good people. I hope so. Kindness and empathy provide comfort on a personal level, but do not lead to protection on a cultural, institutional, or legal level.

In Good White People, Rachel Held Evans, a widely read white evangelist with roots in Tennessee who tragically died at age 37, sums it up nicely:

If one believes that kindness hides racism, it is easy to believe that bigotry is rare and that the label racist should only be applied to despicable and intentional acts of discrimination. The problem with this pattern – besides a gross misunderstanding of how racism works in systems and structures run by good people – is that it forces me to be good in return, rather than fair. I’m expected to deal with racists. Be nicer to them. Take good care of her.

As a philosopher, practitioner, and education researcher who happens to be black and gay, I am also concerned that clergymen are daring to enter the field of child welfare and education by using Scripture to rationalize the anti-LGBTQ ideology we hold against them. It is implausible to claim and praise children with one hand and hide the sword of bigotry behind one’s own back with the other. 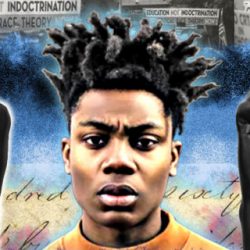 Parents, You Think You Know Critical Race Theory But You Have No Idea

5 Safe Dishes to Cook on a First Date