Home Essays Parents, You Think You Know Critical Race Theory But You Have No Idea

As you might already know, Critical Race Theory (CRT) is an American academic school of thought. It was formed in the early 1990s by the founder of Critical Race Studies, Professor Kimberlé Crenshaw. Basically, CRT says that people are not all the same, and everyone deserves to have the same rights and opportunities. However, the theory also allows for attention to be paid to the way race affects people in the United States.

To white parents complaining about critical race doctrine: Please stop with the reverse racism nonsense and shut up about the false narrative that this theory is currently being taught in our schools.

These claims are blasphemous, baseless, and show how uninformed you are about the theory. If you’ve ever seen, touched on, or read about critical race theory, you know that this concept is primarily aimed at graduate students. If you ask the experts of critical race theory, they will tell you that it takes years of study to fully understand the concept.

If this is true, how can you imagine anyone thinking this theory is appropriate for K-12 education?

As an experienced teacher with 15 years of teaching experience, I have never come across a curriculum for K-12 that explicitly calls for teaching critical race theory. There is no such thing – and there never was! Search if you want, but I promise you won’t find anything.

Let’s be clear: Critical Race Theory is not interchangeable with the 1619 Project, Learning for Justice, the Zinn Education Project, or any other educational platform that reveals the full truth of the black experience in American society.

Critical race theory, however, provides the context and justification for why black history, as well as the experiences of other historically marginalized groups in America, is widely taught in our schools. It also provides a context for discriminatory policies that continue to disadvantage black students. By denying this theory, you are also ignoring the struggles and realities of black people in America. A central element of critical race theory, intersectionality, speaks to the complexity of culture and why black people need navigational capital to survive in a world still struggling to recognize, honor, and protect their humanity.

To the black Republicans and conservative parents who have bought into the anti-critical race theory: No offense, but I have to say it with love. It’s time for you all to wake up!

You have to recognize that critical race theory is the framework you need to fight internalized racism. No matter how much you praise white people or conform to the ideals of whiteness that define our society, the reality is that you are still black, just like me. I’m black. They’re black. We’re all black. In case you hadn’t noticed: Racism doesn’t care about political affiliation or the number of degrees. This is the America we have always lived in, and this is the America our children need to know.

Wherever we raise our children, whether in the neighborhood or in the suburbs, our children will face racism at some point in their lives. It really depends on when and how. So we should at least be on the same side in the struggle for a world where black lives are as valuable and important as white lives, where black supremacy is celebrated and not suppressed, where black genius is the norm and not the exception, where blackness is accepted wholeheartedly and not merely tolerated.

This is the vision we should wish our children. But the reality is that this will not happen overnight. So we must remain the first to motivate, educate and protect the souls of our children. We must continue to breathe life into our children and continually instill self-love and pride in blacks so that they have the strength and self-reliance to stand up to any racial hatred they encounter in their schools.

As has been shown time and time again, delegating this important task to a K-12 school system only leads to more frustration. The fact that in some states white parents can take their children out of black history classes is all we need to know about the culture of white supremacy in our education system. White parents who deny their children this educational opportunity prioritize the convenience of white people and show a distinct lack of compassion for black students who still struggle to understand their school.

Unfortunately, our children cannot relinquish the whitewashed curriculum they receive daily in school, or the American oath that tries to hide the insidious racism that still keeps them in bondage. How can they really avoid racism when it comes at them from different angles and in different forms?

My desire that my three-year-old son be fully recognized as a human being and one day be in a school where his blackness is celebrated, honored, affirmed, and protected should not be a threat to white parents or students. Why is it such a crime for my son and other black children to learn in school about the greatness and resilience of their heroes? Why doesn’t my son have the right to know the truth about America, which was built on the blood, sweat and tears of his enslaved African ancestors?

Finally, for those people who keep asking me why critical race theory is necessary, the answer is very simple. For our black and brown students, internalized racism is the root cause of imposter syndrome. As a result, many of them are not 100% who they are every time they enter their school.

Our children do not come out of the womb with a sense of self-hatred. Instead, they come into a world where the dominant culture teaches them to feel that way. Critical race theory may be a topic of discussion now, but it’s not the real problem for white parents. It’s about controlling the narrative and preserving the natural order of the world at all costs. If that’s not indoctrination, I don’t know what is.

This article was originally published on the Citizen Education website. 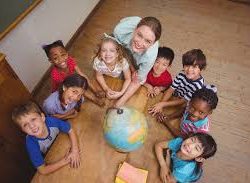